← The Man In The Distance Mix Finished!
Female Country Singer Tracks Online Delivered Over The Internet → 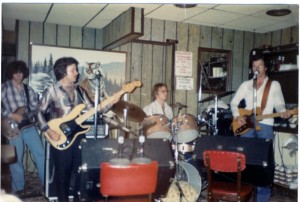 Crows’ Run Band, began performing with four pieces in the Pittsburgh, PA area during the 1970’s. The group typically played five to seven nights each week, but after only 15 months into Bill Watson’s first stint as lead guitarist with the group, and with plenty of work on the schedule, they disbanded for a period due to personal reasons.

CRB achieved a degree of local notoriety during the 1980’s with Paul Dennis in the drum chair. They won a local band contest in spite of competing against bands as large as six pieces. They also released a cassette album mix of originals and cover songs, one of Watson’s first producing efforts. After five years with that configuration, Watson left the group, forming The Billy Elroy Band with Watson on lead vocals and guitar, Don Plum on bass guitar and vocals and “Stitz” (Forrest Stolz) on drums. The Billy Elroy Band went on to moderate success, working steadily for four years, developing a sound that featured intricate vocal harmony, but it was without Plum, who dropped out early, replaced by Butch Curry on bass and harmony vocals. Plum wouldn’t work with Watson again until the band Sidewinder was formed by Watson and drummer, Jimi Miller, in the early 90’s.

In 1991 Bill Watson returned to The Crows’ Run band for the third and final time with Watson on bass guitar and the talented Mike Thellman playing drums, creating a thunderous rhythm section to complement John Roebuck’s powerful vocals and unique guitar playing. But after only a little over a year into the third go-round of performing in small bars, clubs and the local nudist colony, Watson, desiring to focus on propelling CRB to a level beyond the small bar scene, but meeting resistance, became unhappy.

Eventually Watson and Roebuck parted ways, opening the space for Watson and drummer Jimi Miller to form the highly successful and exciting five piece concert band, Sidewinder, with Julie Peterson on bass/vocals, radio celebrity Jimi Miller on drums, Watson’s girlfriend (later his wife) Rhonda Watson, a recording artist in her own right, who would later tour overseas, on keyboards and lead vocals.

Watson and Plum both continued with Sidewinder, riding the wave of success through various configurations, one with Watson’s cousin David Watson. on drums, until Bill Watson moved permanently to Nashville in 2004 to pursue music producing.

Both The Crows’ Run Band and Sidewinder are still intact and performing in small bars and clubs in the Western Pennsylvania and Eastern Ohio area.