Microphone Locker: The AT 4040 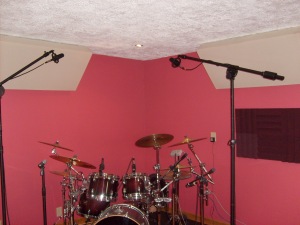 The fact we have a pair of matched AT 4040 microphones is yet another reason to choose Play It Again Demos (our over-the-internet demo recording service) or Nashville Trax to do your recording work. They let us give you predictably fantastic drum sounds, and they add one more color to the producer’s palette.

For large diaphragm condensors they’re “cheapies” listing at around $500 each and retailing about $300. But price is irrelevant to application. In other words, a $150 dynamic microphone will sometimes outperform a $3,000 condenser microphone, it depends on what you’re trying to achieve.

The AT is listed as having relatively flat response across the audible spectrum from 20 HZ to about 20K. In actual use I’ve discovered it is a little heavy on the bass end, not muddy, just loud, and crystal clear in the mids. The high end is clear too but if that’s what the application requires, you have to roll off the bass to reveal it.

We use a pair of AT’s for drum overheads so normally I keep the 80 Hz, 12 dB/octave switch set to minimize the bass response. Once EQ’d properly, they shine as overheads.

I feel blessed here at the studio in two ways. We have a good selection of mics to choose from that cover every recording situation, plus we have a drum kit set up permanently.

So many studios let the drummer furnish the drums and that means setting up and tearing down the whole kit for most sessions. Then the mics have to be set up and re-calibrated each time. It can be done but I have zero time for redundant, skull numbing mindlessness and there’s no way you’ll achieve the consistently great sound inherent in a permanent drum setup unless you have one. So we do.

Comments from seasoned studio musicians on the drum sounds are typically, “I wish my kick drum sounded like THAT!” and, “The drums sound PERFECT, don’t change a thing!”

The drums alone have 9 microphones: bass drum, snare, hi-hat, 3 tom mics, the two AT 4040’s, and a room mic. I can fire up the gear, the drummer can simply sit down and start pounding away and with minimal tweaking, we’re ready to record.

All that being said I must admit that I sometimes pull an AT off the drum kit, usually out of desperation because a far more expensive mic isn’t getting it done. And usually the AT excels. I’ve used them on background vocals, fiddle, even horns.

On one session I used an AT for lead vocal instead of a $1,000 mic that pre-session I figured would almost certainly work because it had for that same singer many times prior. Both the singer and I agreed: The AT simply sounded better for his voice that day- B. E. Watson