Our New Plug Ins Will Take Your Recording To The Next Level!

To say I’m excited about this new batch of plugins we’ve acquired for the Nashville recording studio, Nashville Trax, over this past this month is an understatement. Over $100,000 worth of software recording and mixing madness!

This Solid State Logic plug is $300 retail but well worth every penny; it sounds just like a channel pulled from an SSL 4000 E Series console. There is no way anyone, including a seasoned Nashville studio engineer, could tell the difference in a blind A-B comparison. The richness is there, the clarity, the punch…love it! It’s an awesome addition to our studio that will bring quality up several notches:

And here’s a cropped pic of our new Waves Vocal Rider plugin: 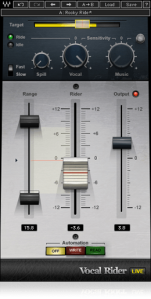 Man, does this take a load off. Until now I didn’t make it a practice to ride the vocal fader manually on demos, it was too tedious and the budget isn’t there for that degree of manual labor on a demo mix. Only master mixes with inherently higher budgets received that level of attention to detail.

This SSL vocal fader plug will change that. Less than 60 seconds of setting levels and it rides a vocal automatically, pre-reading the vocal signal, comparing it to the mix level, then adjusting the vocal setting in real time to compensate for the music/vocal variations and keep the vocal in your face at all times. Awesome! Awesome, AWESOME! Why NOT start using it on demos too?

But guess what? We purchased the version for bass guitar too!

Here’s a studio screen shot of our Bass Rider in action on a mix:

And Max Bass? Got it! In the Max Bass window, the green area on the left is the original bass signal, the green line slanting left shows where the frequency of the original signal cuts off and the brown area to the right shows the frequencies generated by Max Bass, psycho-acoustically creating a huge bass sound that seems to eminate from everywhere, rather than from the fixed point of the stereo speakers.

Combine the Max bass, Waves Bass Rider and Vocal Rider and you have the foundation of one fantastic mix!- b.e.