Cowboy Coterie: Proof That Indie Product Can Be Great! 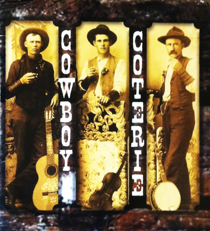 The album of cowboy songs by Brian Berquist, Cowboy Coterie

Coterie: A small, exclusive group of people with shared interests and/or tastes. A clique.

Cowboy songs may not be your bag, but you might wish to check this out anyway, it’s a great example of an independent project “done right!”

I had produced about fifteen songs for Brian Bergquist- country, pop, you name it- when he called me one evening from his home in Manitoba, Canada (I think he said the temperature was average, about forty below zero there!) with an idea: “I want to do an entire CD of Cowboy songs,” he exclaimed.

The whole thing was pretty much mapped out in his mind and it made sense: the musicians, the artwork, the promo. He wanted it sparse, to sound like cowboys sitting around a campfire telling stories and swapping songs. Sparse, yet high quality: acoustic guitar, male and female vocalists, and he just had to have a Nashville musician he’d heard playing fiddle on a TV show coming out of Nashville, one Wanda Vick. “She just plays so beautifully,” he said.

I discovered, courtesy of Brian, that there was a bigger market than you’d think for cowboy songs. There were cowboy poetry circuits, cowboy conventions, magazines serving the market, just all manner of places and devices to market a project of this sort. I realized an endeavor of this magnitude would eat up a great deal of my time but he convinced me it was well worth pursuing. And “cowboy campfire songs”….who does that? Very cool!

For the next few months I entered an imaginary world where men wearing cowboy hats and carrying six-shooters still ride the range; where cactus, rattlesnakes and campfires were part of daily life; and where tumbleweeds are fascinating objects worthy not just of mention at every opportunity but often the focus of an entire conversation.

And oh how I LOVED being there!

So we started bouncing his tunes back and forth. He’d sing his melodies over the phone, I’d record them into Pro Tools, figure out the chord arrangement his melody and lyrics suggested, record a simple rough with me singing and playing acoustic, then send that on to the real singers as a guide. Because he “wrote” a capella, things didn’t always line up in a musical framework. There was quite a bit of lyric revision and rewriting to beat Brian’s songs into shape.

Finally, we moved on to actually recording tracks. Meanwhile Brian was working with various graphic artists designing the cover and inner sleeve artwork. I was astounded when I started receiving the proofs from the graphic artists: 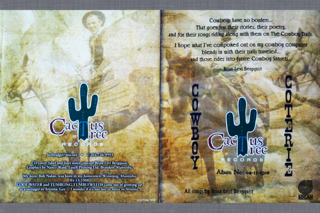 Independent product CAN have fabulous artwork!

And this, which has the list of songs and credits. The lyrics to every song are on the back:

Just because you own a computer and software allowing you to design your own artwork doesn’t mean you are a graphic artist. Be smart like Brian and get the input of a pro. Yes, it costs, yes it makes your project look more professional and speaks well of the music inside.

So the project is now complete, the songs sound great, the whole thing has a cohesive feel, and the lesson here is valid regardless of whether you’re doing cowboy songs, pop or metal: to not limit yourself, take your time, invest wisely, and you too, can do quality.

Just as important, have a target market in mind upfront and ensure every element of the project aims straight for it.- b.e.

* Unfortunately Brian passed away on May 7th, 2013. I never met him in person but we spent many hours on the phone working out song details, discussing the music business and becoming friends. We often joked that we were long lost cousins.

Cuz, you be sorely missed until, I too, reach “The End of My Trail.” But we both know where this trail ends and the next begins; there I’m sure we’ll saddle up together once again and ride where the tumbleweeds roll.