A clip of “Found The Truth” a Christian song driven by Jennifer L’s soulful vocal, just as it reaches the incredible sax solo:

“I liked the ‘Pink Floyd music meets The Beatles vocals on the client rough, and thought, yes, something modernized in that direction would work. Safety resided in the obvious path: go with the Pink Floyd vibe, regurgitate the client version, only updated and better; no risk, happy client.

But great music doesn’t reside in that space. Job security? I could care less, if I needed that I’d have been an accountant.

I tossed the thought to the guitarist and drummer on the session that a more bluesy aim might be where this tune should really land. Greg Jennings, one of the founding members of Restless Heart, picked up his electric guitar and started laying down a soulful rhythm guitar part, William Ellis of Montgomery Gentry and I joined him on drums and bass guitar respectively, and about a minute in I decided it was definitely happening, the right vibe, “put it in the red” and we cut this 3 piece rhythm track.

Many hours of overdubs and engineering work later, this mix happened.”-bill w. Client reaction: “Hey Bill, WELL, Just gotta say WOW, you nailed it! Greg Jennings is perfect on guitar, not too much but simple, as John Lennon said: keep it simple. How beautiful!! You played a GREAT bass line! Jen is incredible, OH DID I MENTION SAX,sax sax? Never thought that I would love this song so much, YOU proved me wrong, GREAT JOB! Two more songs are on the way.” ROB C 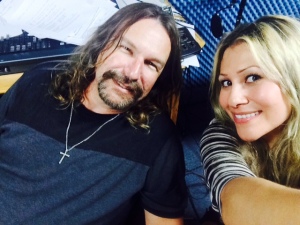 Why not have Jennifer sing your song?

A special thank you on this one to my buddy John, who was so incredibly patient as I coached him to hear the sax solo I was hearing. He got it off to great start with the initial phrase. Once he got the remainder, man, he just absolutely delivered with the perfect energy and emotion this song needed to pull it together. He always says, “if you can sing it, I can play it. The whole truth is: he’ll play it far better than you can sing it!” B. E. © 2012 Winston Harold. Used by permission to demonstrate production values. All other use is a violation of U.S. and International copyright law.

Breaking News: Mix Finished on Midnight, Me and the Moon, Client Thrilled!

Midnight, Me And The Moon, the first of a five song project is finished:

B4 and after. Here’s the “client version” clip, the version Wayne submitted as his rough. It perfectly mapped the direction he envisioned:

Our job was to employ our considerable experience and available talent to bring Wayne’s idea to fruition. Our Version:

Judging by his glowing e-mail, client Wayne Lewis of Alaska is thrilled:

To
Bill Watson, Nashville Trax
Today at 12:47 PM
“GREAT Job, Bill!!!! I agree with you…it works perfectly well with a female vocal. Good call! Everybody did a terrific job. Please thank Jenn especially, she gave it a wonderful ride! Wayne”

Wayne’s songs two through four will feature male vocalists are in various stages of production with two mixes expected to be finished toward the end of next week.

“Wayne felt we should record this with a vocalist that sounds like Dwight Yoakum. I liked his idea of giving the recording a bit of rockabilly vibe and making it sound almost like the listener is hearing a live band but the more I worked with it in pre-production the more I could hear a powerhouse country female vocal, so I went with my instincts without letting Wayne know. Jennifer just flat out delivered an excellent performance that made the concept work. I didn’t realize at the time this would be the first song of the five I’d finish so it was nail biting time when I sent Wayne the mix. Hey, the tune rocks, Wayne loves it, ALL GOOD!” – Bill Watson, producer 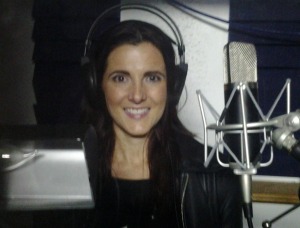 Here’s Jennifer just prior to tracking her vocal on Midnight, Me and the Moon!

Midnight, Me and the Moon © 2014 by Wayne Lewis is for demonstration of production values only. Any other use is a violation of U.S. and International copyright law. Requests to record this song will be forwarded to the songwriter and/or publisher.

Why not let Jenn sing YOUR song?