The Nashville Trax A Team

Posted: May 18, 2017 | Author: supermagicmusic007 | Filed under: Now Tracking, Samples of Our Work, Testimonials |Leave a comment

Welcome to Nashville Trax! Yes, we are located in the Nashville, Tennessee area and we are the home base of the incredible Nashville Trax A Team detailed below.

Scroll down this samples page and you’ll find numerous samples of work we did for many different clients.

Whether you need a demo of your song, a master, a performance track, a session quality instrument track added to a project you are producing, mastering of your mix, or even an entire album produced, the Nashville Trax A team, featuring our best players, is available at a price lower than you might think.

Read what one of our current clients e-mailed to Nashville Trax’ music producer (B. E. Watson):

“These tracks are smokin’ hot, Bill!!! This album is going to ROCK country style!!! Thanks man!!!! Wow!!!!!!” -Joe Finley, front man for The Swansons, regarding the tracks posted below.

And from client Mike Martin of the Sacramento, California area:

“Hi Bill, I have been playing my CD with the four songs you recorded for me and everyone is amazed at the quality of recording as well as the musicianship. You make records and even demos that are radio ready in my opinion and I just wanted to say thank you for all your work.”

The Swanson’s album, Country This, produced by Bill Watson right here at Nashville Trax won The Producer’s Choice Awards “Best Country Album” in April of 2018. The Swansons also cut their second award album here, “BAM” in 2019, and we are part ways through Swanson’s album # 3!

Here’s our A team- we call them The Hitmakers- on a music-only track intended for the Swansons’ album:

The Swansons, who perform live shows and do have their own band, have also started playing selected live shows here in Nashville and other locations with The Nashville Trax A Team, such as the 2018 Producer’s Choice Awards show in Las Vegas with The Swansons, Brent Mason on guitar, Jenee Fleenor on fiddle, Bill Watson on bass guitar and Jim Riley on drums.

Would you like a quote on your project using these musicians?

The Nashville Trax A Team is comprised of session veterans such as Jenee Fleenor, who plays fiddle and mandolin for major label country artist, Blake Shelton.

She was also the fiddle player on John Pardi’s 2016 Billboard #1 country hit “Head Over Boots” as well as the fiddle player on the #1 followup song by Jon Pardi that was certified gold for sales and streaming of 500,000 copies “”Dirt On My Boots” which features Jenee’s playing throughout.

She is the 2016 CMA Touring Musician of the Year as well as the fiddle player for the popular television show, The Voice.

In fact, Jenee turned down Aerosmith’s Steven Tyler’s offer to tour with him (to support his country album) but she is doing selected Steven Tyler dates…and guess what? Hire us and she’ll definitely play on your project!

And here’s a quick rough mix of a three piece rockabilly jam with Brent Mason on guitar, Jim Riley drums and Bill Watson on bass guitar. More instrument parts have since been added; be sure to pick up a copy of The Swanson’s album (produced by Nashville Trax, intended for release November/December 2017) to hear the full mix:

Same song, same rhythm, track, but with Jenee, Mike, Joe and Angie Finley and other members of the A team on board, and EQ and effects applied to the tracks:

Here is our A Team playing that same song with The Swansons on their Nashville live debut/CD release party, 9-22-17: 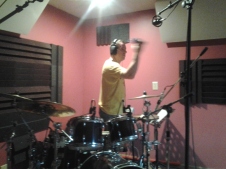 Some of the other A team tracking and overdub players we use:

“One of the best memories of my entire life!! Thanks to you and your crew of  ‘Hitmakers’ Bill Watson!! Thanks again!

” – Songwriter Joe Finley of The Swansons.

Something’s Better, Valentine and I Need Your Love are all © 2017 Joe Finley, published by Listen Again Music (BMI). Posted for demonstration of production values only. Any other use is a violation of U.S. and International copyright law.