← Our New Plug Ins Will Take Your Recording To The Next Level!
Study Claims Increased Ability To Hear Pitch In Adults On Valproate →

The Freemans : Voice In The Desert CD 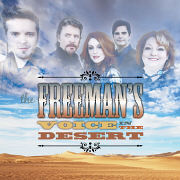 Freemans Voice In The Desert CD

The Freemans are just one of the big name Southern Gospel groups that call Hendersonville, TN home base, H-ville is about a 15 minute drive north of Nashville. The Oak Ridge Boys, The Isaacs and others do the same, as well as several top nationally known bluegrass groups. I’m not sure why there’s such a concentration in such a small area, obviously the proximity to Nashville plays a part but there are probably historical and family connections as well.

I met Darryl Freeman and his son, Caylon, the drummer in the band, for the first time about 8 weeks ago. They gave me a free copy of their newly released Voice In The Desert CD which I’ve since listened to several times and found to be super.

Reading the liner notes I noticed they didn’t write their own music on the CD so that might be a pitch opportunity for you if you have something that’s dead on target for their next project. I highly recommend you purchase their VITD album and listen thoroughly beforehand, just because you wrote a song that mentions Jesus it doesn’t mean it will fit their style- b.e.